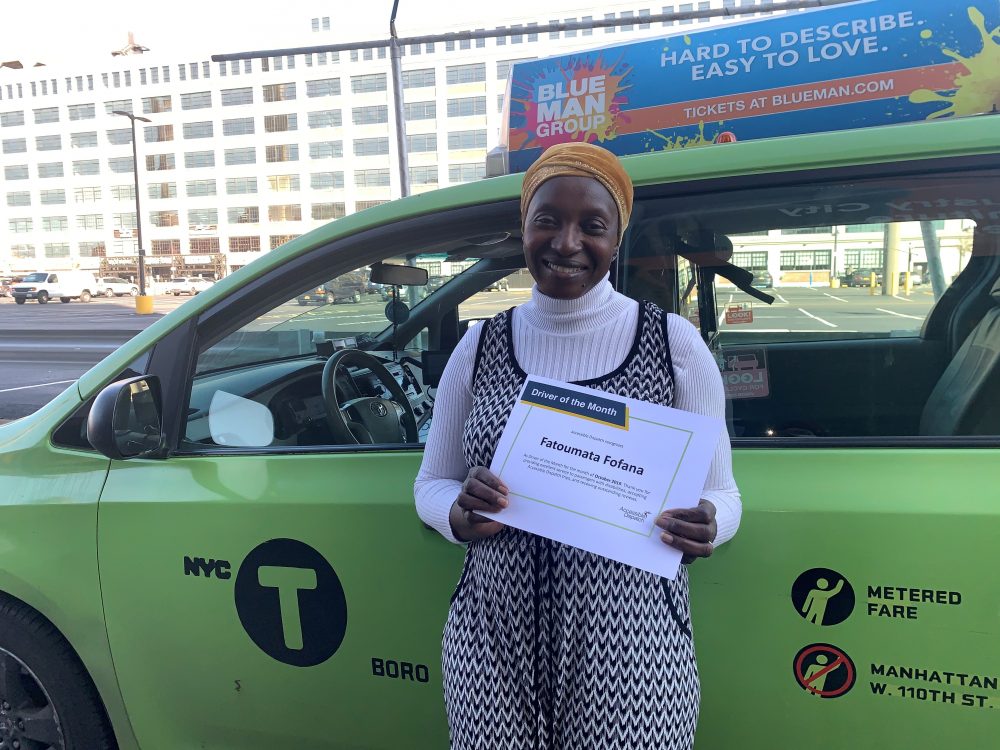 When Fatoumata Fofana pulled up to the Accessible Dispatch in her green wheelchair accessible vehicle (WAV) to pick up her certificate and prize package for Driver of the Month, she glowed.

Fatoumata is the first woman to earn Accessible Dispatch’s Driver of the Month title, a monthly award celebrating the accomplishments of our most active drivers who serve the disability community. Fatmoumata credited sibling rivalry as the fuel to her road to success.

Fatoumata’s brother-in-law Daouda, a fellow wheelchair accessible taxi driver who ranks as one of our top performers, introduced her to the Accessible Dispatch program. At the close of the summer, he challenged Fatoumata to keep up with his accolades and compete to vie for our weekly Most Active Driver of the Week title. She accepted his challenge and booked the most outer-borough pick-ups.

Making up only 1% of medallion drivers, women first became part of New York City’s iconic yellow taxicab force in the 1940s. By the 1970s, several thousand women were a part of the city’s yellow taxi fleet, but that figure declined to a few hundred by the 1990s. The numbers are back on the rise because of women like Fatoumata and others before her.

As part of her Driver of the Month prize package, she also received a $150 gift card. “I love being a driver and helping others,” Fatoumata, who’s been driving a taxi for more than two years and a WAV for the last six months, declared.

“I like to drive this taxi, it’s my passion. I am excited when I get in the car,” she added. Fatoumata says she has benefited from Accessible Dispatch’s weekly WAV Refresher training, where she learned how to properly operate the ramp and safely secure passengers who utilize wheelchairs.

“I want other women drivers to know that they can do it too,” Fatoumata said.

November 2019 marks what would have been the 105th birthday of icon Gertrude Hadley Jeannette, an African American playwright, actress, and producer who was also known for being the first woman to work as a licensed taxi driver in New York City, which she began doing in 1942. Her most notable Hollywood role was in Shaft (1971). She died on April 4, 2018 in Harlem.

Both Fatoumata and Gertrude, independent and driven, are inspiring reminders of how far women have come and will continue to go. Congratulations on this exciting accomplishment Fatoumata!