Every year, the Mayor’s Office for People with Disabilities works with the non-profit organizations Disability Pride NYC and Art Beyond Sight to organize the New York City Disability Pride Parade. This year‘s parade was bigger and better than ever, with the 2018 parade kicking off in Madison Square Park on Sunday, July 15.

The Accessible Dispatch team marched with the Taxi & Limousine Commission, along with other NYC organizations and agencies, along the parade route from Madison Square Park back to Union Square Park via Broadway. The energy was unmatched. There were extravagant costumes of all sorts prepared to compete in the ‘Best Costume Contest’ and decorative floats whose sounds lit up the atmosphere, creating a soundtrack for all of the marchers and attendees on a quest to win the ‘Best Float Contest.’

At the conclusion of the parade, marchers participated in a lively festival in Union Square Park, where the Accessible Dispatch team greeted hundreds of New York City constituents at our booth. Festival-goers learned about the Accessible Dispatch program and had the opportunity to take home informative brochures and swag items like t-shirts, lanyards, water bottles, magnets, notepads, and pens.

We enjoyed discussing the expanded service areas that now accommodates pick-ups and drop-offs in all five boroughs, our app which is available in the App Store for Apple and Google Play Store for Android, and answering your questions about our future goals for the program. behalf of the Accessible Dispatch team, we would like to thank everyone who attended the parade and stopped by our booth. Your expressions of gratitude and smiles were a huge asset to the success of the day and parade. See you next year!

To learn more about the Accessible Dispatch Program, visit: https://accessibledispatch.com/about-us/

To learn more about the Disability Pride Parade, visit: https://www1.nyc.gov/site/mopd/events/disability-pride-parade.page

>> Accessible Transportation is the Future of New York City

>> Accessible Dispatch Wants to Hear from You! 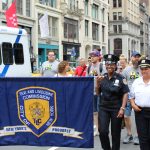 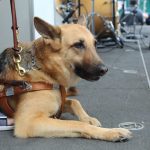 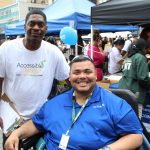 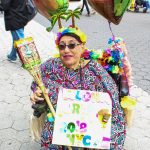